Home » Other / Miscellanious » What Is Lyme Disease? Symptoms, Treatment, and How To Prevent It

What Is Lyme Disease? Symptoms, Treatment, and How To Prevent It

Lyme disease is caused by the bacterium Borrelia and is acquired from the bite of an infected tick. Lyme disease is so prevalent that it is the most common tick-borne infectious disease in the United States. Like many infectious diseases, the initial symptoms are vague (such as fever, muscle soreness, and headache) making diagnosis difficult. Nonetheless, making an early diagnosis and subsequent appropriate treatment is critical to prevent the symptoms from moving past this mild stage and become chronic and debilitating.

The Number of Cases of Lyme Disease is on the Rise

It is important to be vigilant in our personal protection against ticks as the number of people diagnosed with Lyme disease is on the rise; the Center for Disease Control and Prevention (CDC), the leading national public institute of the United States, reports a 3-fold increase in cases since 1992. Between 2008 to 2015, the CDC received a total of 275,598 reported cases of Lyme disease, but acknowledges that only a fraction of cases is officially reported to the CDC. Strikingly, it is estimated that there are over 300,000 new cases of Lyme disease every year, possibly up to 444,000, and this number continues to grow.

Here we will address the basics stages, symptoms, and treatment of Lyme disease, as well as provide information on how to avoid being infected to help you manage your health.

Stages and Symptoms of Lyme Disease

The first thing to understand about Lyme disease is that it can occur in 3 stages; this is important to know because each stage may present with different symptoms that require progressively aggressive treatment.

The initial stage of Lyme disease begins shortly after being bit by a tick infected with the bacterium Borrelia burgdorferi (the primary culprit, but not the only) and is referred to as Stage 1 Early Localized. The most prevalent symptoms are similar to having the flu. 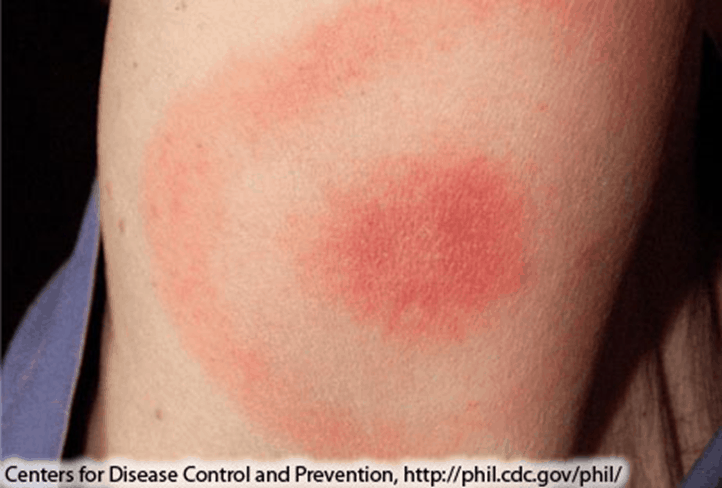 A classic indicator of Stage 1 Lyme disease is an Erythema migrans (EM) rash that frequently resembles a bull’s eye as the rash expands (Figure 1); the rash can also be a homogenous red or have a central clearing. Approximately, 70% to 80% of infected individuals have an EM rash of some sort at the site of the tick bite by 7 days, ranging from 3 to 30 days, and this rash can spread to other parts of the body. However, lack of a bull’s eye rash does not mean there is no infection, making early diagnosis difficult as discussed below.

Figure 1. The Classic Bull’s Eye Rash Associated with Lyme Disease: A circular red rash with a centralized clearing that slowly expands as the infection begins to spread. This rash is technically classified as an Erythema Migrans Rash.

Image compliments of the CDC.

Lyme disease can extend past the initial presenting flu-like symptoms as the B. burgdorferi infection moves through early localization to early and late dissemination as the infection spreads throughout the body.

If the B. burgdorferi infection is not treated in the early localized stage 1, the bacteria eventually disseminates (spreads) into the blood and lymph nodes progressing to the early and late dissemination stage. This bacterial infection starts to spread anywhere from 3 days to 30 days after the initial infection. Late dissemination stage Lyme disease generally occurs 3 months after initial infection and presents as more serious symptoms involving cardiac, dermatologic, and musculoskeletal systems. Late-stage symptoms also include neurologic involvement, such as inflammation of the brain and spinal cord that can result in short-term memory lapses, and shooting pain, numbness, and tingling in the hands or feet, along with psychological symptoms. These late-stage disease symptoms can manifest months or years after a tick bite. Antibiotics are much less effective at treating Lyme disease that has manifested past the extracutaneous sites, and treatment times are longer.

The stages and some of the symptoms that occur in each stage are listed below, however, these symptoms are not mutually exclusive to each stage.

What’s the Treatment for Lyme Disease?

A person can be clinically diagnosed with Lyme disease during the early localized stage of the illness if they have an EM rash and live in an area endemic to Lyme disease based on the current CDC guidelines. In the later disseminated stages 2 and 3, serological diagnostic tests are used for diagnosis.

Lyme disease can be effectively managed and cured with appropriate antibiotics approximately 80% of the time when treated early. Adult and children treatment guidelines suggest Doxycycline, Cefuroxime axetil, and Amoxicillin antibiotic regiments, albeit different dosage and duration are recommended for each age group. In some situations, intravenous antibiotics may be recommended. Macrolides azithromycin, clarithromycin, or erythromycin may be used for people intolerant to the suggested antibiotics; however, they have a lower efficacy.

Patients that are non-responsive to initial treatments may develop chronic symptoms or what is referred to as chronic Lyme disease or post-treatment Lyme disease syndrome (PTLDS). Likewise, individuals with delayed diagnosis experience persistent symptoms that can last years.

There is controversy as to whether PTLDS is a real disorder. A recent study led by Aucott at John Hopkins University is the first to scientifically confirm that there are severe symptoms that linger after antibiotic treatment. The PTLDS patients reported severe fatigue, pain, cognitive complaints and difficulty sleeping. The chronic and debilitating symptoms that can accompany Lyme disease will be treated by their physician according to the severity of the condition and the patient’s response to antibiotics.

The good news is that diagnosing Lyme disease in Stage 1 often results in a full recovery when treated with oral antibiotics.

The bad news is that the diagnosis of Lyme disease is difficult! There are 2 main challenges to properly diagnosing Lyme disease.

(1) Symptoms are similar to many other infections and chronic diseases. The similarity of symptoms can cause misdiagnoses. For example, early symptoms mimic a non-specific viral infection, while late stages can mimic other chronic conditions, such as chronic fatigue syndrome, fibromyalgia, and multiple sclerosis.

It is striking that about half the patients with PTLDS in the Aucott study had delayed Lyme disease diagnosis or received inappropriate antibiotics or steroids before receiving the appropriate treatment.

For specific treatment options of Lyme disease, it is important to consult with a medical professional that is familiar with Lyme disease.

How to Prevent Lyme Disease

Most cases of Lyme disease center in the Northeast, upper-Midwest, and mid-Atlantic areas. Cases can also be seen in some areas of the Pacific Coast, and more cases are being reported in states bordering the high prevalence areas. These geographic areas have high populations of small animals like birds and deer that are required as host for the tick life cycle, and in these high endemic areas, like Southern New England, up to 50% of the ticks are infected with B. burgdorferi.

Being aware of areas with high concentrations of ticks and keeping vigilant after time outside can help with both prevention and diagnosis. Using insect repellents and wearing appropriate clothing can help prevent ticks from adhering to you in the first place. It is also recommended to check for ticks after spending time outdoors in areas with high tick infestations. 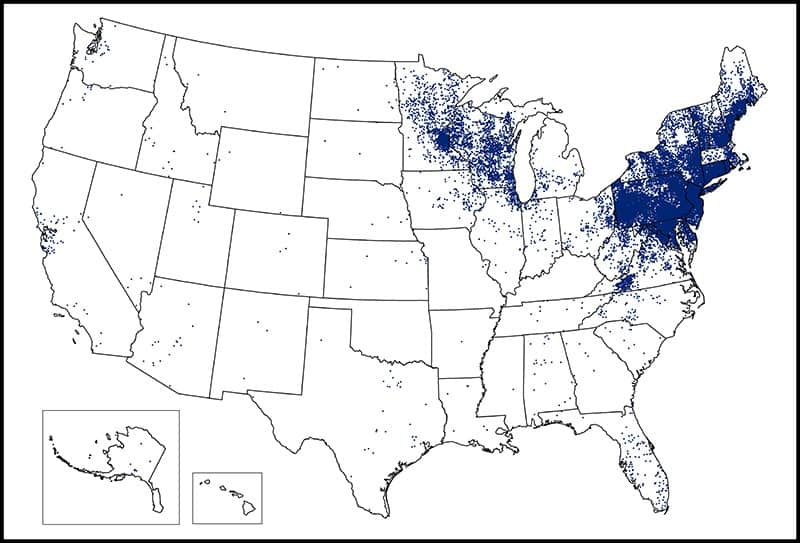 In 2016, Massachusetts transitioned to a surveillance method that relies primarily on laboratory reports. This method does not currently align with the national surveillance case definition as set by the Council of State and Territorial Epidemiologists (CSTE). Therefore, information on most Lyme disease cases occurring in Massachusetts is not sent to the CDC. Please contact the MA Department of Public HealthExternal for case numbers.

Cases of Lyme disease spike during the summer months, with the vast majority of cases reported between May and August. The reason for the surge in Lyme disease during the summer is multifaceted. First, we spend much more time in areas inhabited by the blacklegged ticks that carry the bacterium that causes Lyme disease. In addition, most people are infected by immature ticks (nymphs) that are much more prevalent during the moist warm spring and summer. These nymphs are very small, typically about the size of a pinhead, making them difficult to detect on your skin. Adult blacklegged ticks can also transmit the bacteria responsible for Lyme disease as is the case in the Fall. Therefore, while summer weather entices us to enjoy nature and head outdoors, it is important to be aware that insects that can carry disease-causing pathogens that can have long term consequences to our health. Taking the preventive measures of before heading outdoors can decrease the risk of being bitten by a tick.

Note that the tick must be attached to the skin for a minimum of 36 to 48 hours to transmit the bacterium. The chance of contracting Lyme disease goes up the longer an infected tick is attached, so early tick detection and removal significantly minimize exposure to infectious agents.

If you are ever prescribed medication for Lyme disease that you cannot afford, Prescription Hope is here to help. Visit us online now and fill out an application to get started!