Home » Other / Miscellanious » Vyvanse and Coffee? The Effects, and How to Take Both, a Guide

Vyvanse and Coffee? The Effects, and How to Take Both, a Guide

When it comes to medication, it can be confusing to understand what medications can be combined with other substances. One such medication and food combination that is sometimes discussed is Vyvanse and coffee.

In this article, we’ll offer a clearer understanding of Vyvanse and coffee, including if you can combine them, the effects, and if it is safe. First, here’s a quick summary takeaway answer, then we’ll get into more detail and some possible alternative solutions!

Vyvanse and Coffee? Vyvanse and coffee are stimulants that can interact with one another. Coffee mimics the properties of Vyvanse, which is used to treat ADHD. Coffee alone can help control ADHD. But when taken with Vyvanse, the effects of controlling ADHD intensifies. This can result in unpleasant and harmful side effects.

Medications and a person’s diet often go hand in hand. With many medicines known to interact with a person’s food intake, whether or not certain foods and liquids suit a medication has always been arguable.

A patient needs to know if the medication they are prescribed will interact with a substance they regularly consume. Therefore, here is everything you need to know about Vyvanse and coffee.

Does Vyvanse interact with coffee?

Yes, coffee and Vyvanse interact, and the interactions are said to be moderate. This moderate interaction is believed to increase depending on the amount of caffeine, or coffee, and the dose of Vyvanse one has. The severity of interaction also increases based on whether or not these two are taken just after one another, or hours apart.

In general, too much coffee interferes with the effectiveness of Vyvanse. This may be due to coffee being a diuretic. So, coffee may not allow Vyvanse to be fully absorbed in the body.

However, due to the properties of Vyvanse and coffee, there can be side effects. Some of the common side effects of taking caffeine with Vyvanse are:

These side effects can be mild to severe, depending on the patient, as well as variations in the dosage of Vyvanse and coffee.

Some individuals experienced mild side effects despite taking high doses of coffee while taking Vyvanse and vice versa. So, the interaction also depends on the body, age, and the overall system of the person.

Relationship between Vyvanse and Coffee

As you might know, Vyvanse is an FDA approved medication for ADHD (Attention Deficit Hyperactivity Disorder) in adults and children who are at least 6 years old. It’s sometimes used for treating binge eating disorder in adults as well.

ADHD is a general health condition where people can be hyperactive above normal levels and show impulsive behaviors. The main struggles people with ADHD go through are lack of focus, concentration, and attention in carrying out a daily lifestyle. 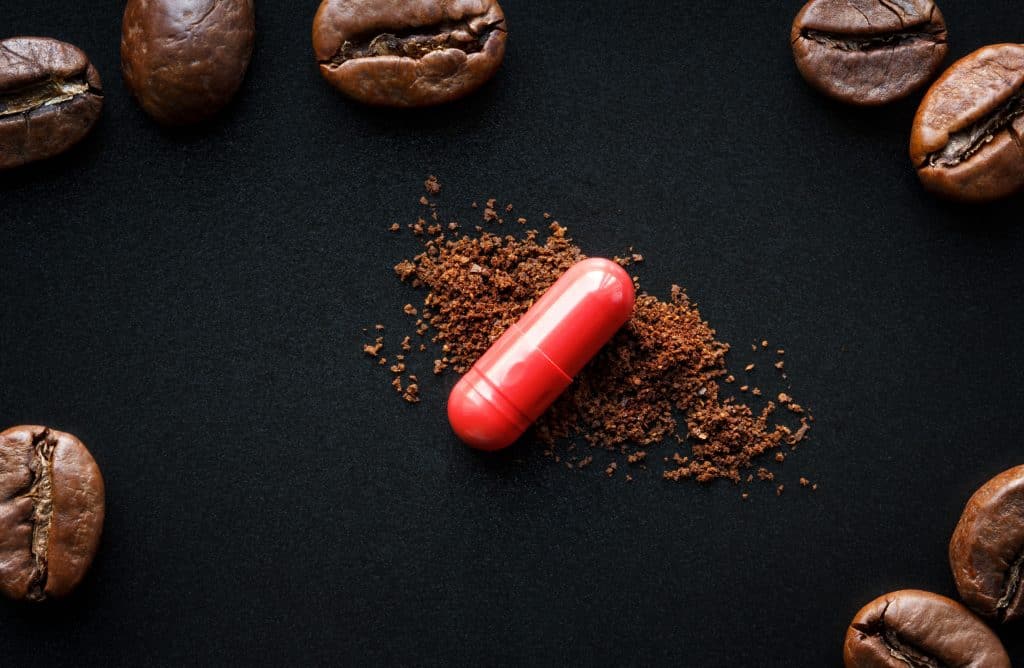 This means that students may struggle to accomplish schoolwork or to study for a test, and others may struggle to perform workplace tasks. So, Vyvanse tries to boost attention, concentration, and focus in patients with ADHD. It works by increasing norepinephrine and dopamine levels.

Coffee and other caffeinated products also help stimulate the brain and boost one’s focus and energy levels. What happens when you consume coffee is that it stimulates the body’s central nervous system and promotes the brain to produce a neurochemical known as dopamine.

Dopamine helps control the brain’s ability to focus and concentrate. This means that taking caffeine can help a person concentrate, with better focus and attention.

This is possible because caffeine is a stimulant along with Vyvanse.

Dopamine levels only need to be increased by a marginal amount to help people focus on their work better.

So, if an average person takes a cup of coffee to stay awake and focused when studying and they take too much coffee, they might feel restlessness and uncomfortableness developing quickly. This is because dopamine is increased beyond normal levels. This would then make it very difficult even for a person without ADHD to concentrate.

But when taking Vyvanse along with coffee, the effect may be different. Because both coffee and Vyvanse increase dopamine, a person may begin to experience adverse side effects because of too much dopamine in the brain.

Alongside this, caffeine and Vyvanse act as vasoconstrictors. This means that they help in making the blood vessels smaller, which will thereby reduce the blood flow.

This is why many people find caffeine helpful for headaches. What exactly happens when the blood vessel gets smaller is the blood flow reduces. The reduction in blood flow reduces the overactive regions (the regions that cause hyper activeness and instabilities) of the brain.

This would then allow the brain to stabilize and better function with concentration and proper cooperation with the rest of the brain. So, in this sense, both caffeine and Vyvanse have similar effects in controlling blood flow to treat ADHD.

So, this brings us to the conclusion that caffeine “mimics” the properties of Vyvanse and how it treats ADHD. This also means that when coffee is taken with Vyvanse, some side effects or adverse reactions should be expected.

When coffee and Vyvanse combine, they interact and cause an effect called synergy. Synergy happens when two drugs or chemicals have an additive mechanism of action. This means that coffee and Vyvanse mimic the majority of each other’s properties.

This synergy will make the combined effect of these two elements much more powerful. So, in this case, when taking Vyvanse and coffee the dopamine levels that are increased by Vyvanse would be increased even more by the intake of coffee.

This means that the dopamine level would be increased more than the healthy levels, leading to a higher risk for serious side effects.

On the other end of the spectrum is when coffee causes Vyvanse to lose its effectiveness. This may occur due to coffee being a diuretic. A diuretic increases the production of urine. So, your body is ridding itself of extra fluid and salt with the intake of coffee and other caffeine products.

This means that if you drink coffee after taking your Vyvanse medication, the Vyvanse may not have a chance to absorb into the body fully. The effect of combing Vyvanse and coffee highly depends on the amount of coffee being consumed and the dose of Vyvanse you have been prescribed.

But You Want to Drink Coffee! What Can You Do? 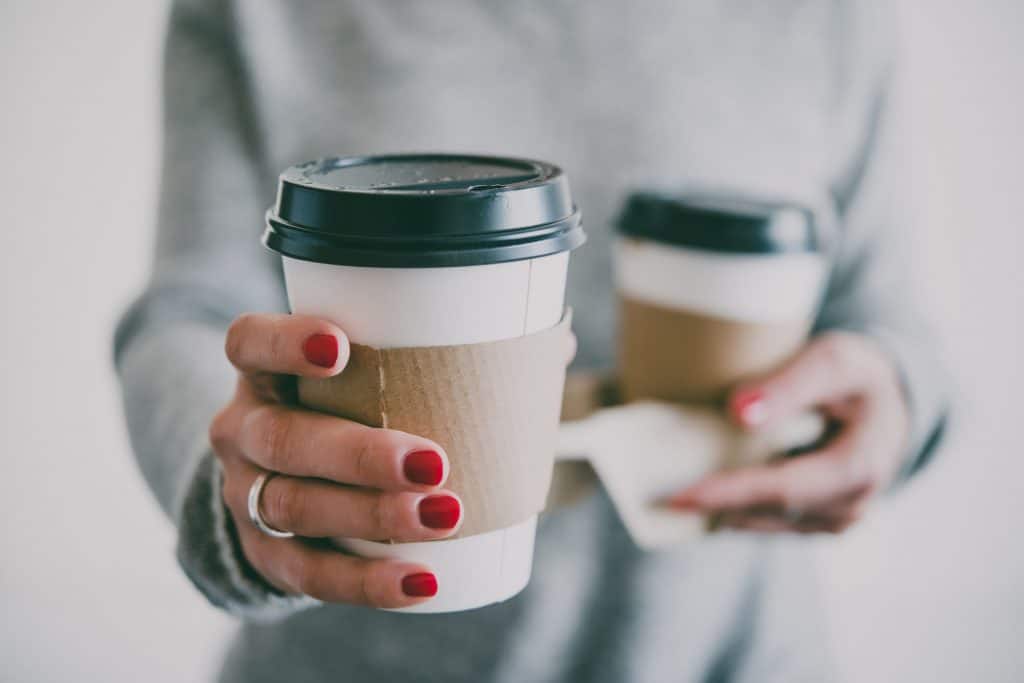 It’s worth mentioning that some brands of coffee are more caffeinated than others. The FDA states that the recommended maximum dose of caffeine for healthy adults is 400mg.  To give you a better understanding of how much caffeine is in coffee – a tall brewed coffee from Starbucks has about 235mg of caffeine, and a venti brewed coffee has over 400mg of caffeine.

So, it’s recommended for patients on Vyvanse to consider switching to decaf or half-decaf.

If you’re a real coffee lover, you could start with a small dose of coffee while on Vyvanse and see how your body responds. You can gradually increase the amount of coffee you drink while on Vyvanse, but it is highly recommended not to go overboard. Always consult your doctor.

Note – If you feel jittery or have other side effects from combing coffee and Vyvanse, you should drink plenty of water and call your doctor. Having a meal may lower the impact of caffeine as well.

Alternatively, there are other ways of intensifying Vyvanse to make it last longer. Or find out more about Vyvanse and Exercise.

We hope this has been useful in understanding the interactions and combinations of Vyvanse and coffee. If you’re in any doubt or if you’re experiencing side effects, then consult your doctor at the earliest convenience.

We, as much as anyone, understand that affording medications you need is challenging and makes managing your health condition even harder.

Prescription Hope is able to provide medications to individuals at the set cost of $50 a month for each medication. We work directly with pharmaceutical manufacturers and utilize their patient assistance programs. Enroll with us to find out if you are eligible and start saving money.