Home » Health and Wellness » What Is CBD? How Does It Work? Benefits, Side Effects, and Information

What Is CBD? How Does It Work? Benefits, Side Effects, and Information

Cannabidiol, abbreviated as CBD, is being heralded as a natural remedy for a wide variety of common ailments and is a hot topic of discussion among friends and family, as well as the medical community and US regulatory agencies. So, what is all this hype about?

First, let’s dive into the basics of CBD, where it comes from, and why it is now being sold almost everywhere. 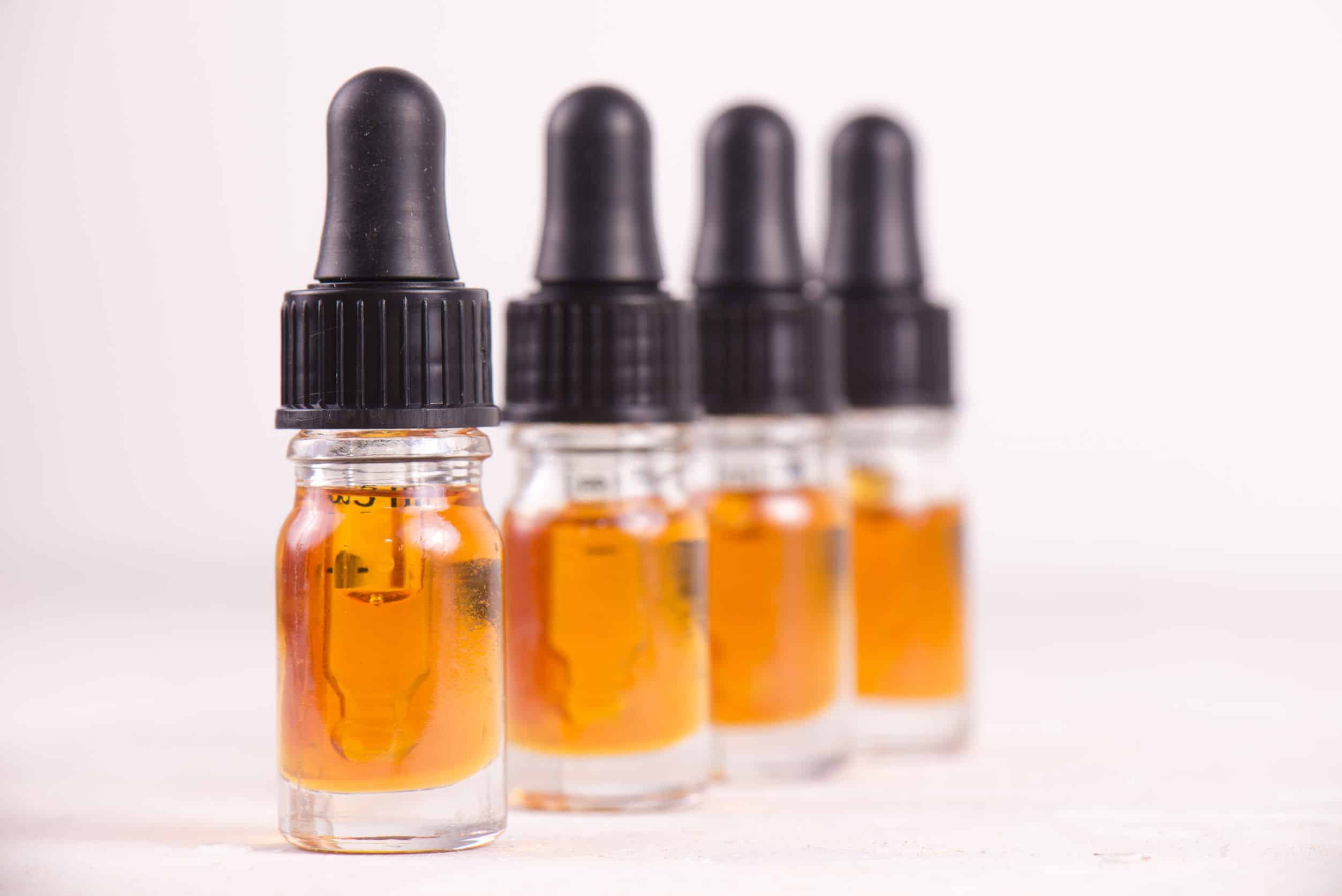 CBD is a naturally occurring chemical compound that is found in high concentrations in the herbaceous plant Cannabis sativa.

Interestingly and the cause of much confusion, both hemp and marijuana plants come from the same Cannabis sativa species. While marijuana has traditionally been used for recreation and medicinal purposes, hemp has been used for a variety of industrial and commercial products including clothing, textiles, and paper. The use of hemp has expanded with the passing of the 2018 Farm Bill allowing for many of the products currently on the market.

The most notable distinction between hemp and marijuana is that you do not get “high” from smoking or ingesting hemp. Hemp lacks mind-altering properties of marijuana because it contains only low levels of the psychoactive and hallucinogenic chemical Deta-9-Tetrahydrocannabinol (Δ9THC, commonly referred to as THC) found in marijuana plants. In fact, hemp is defined in the United States as not having more than 0.3% THC on a dry weight basis. By comparison, the flowers of some of the most popular strains of marijuana contain 17-28% THC.

CBD is found in both marijuana and hemp in fairly high concentrations making purification fairly simple. For use in products, CBD is extracted from hemp using a variety of methods, all of which result in CBD concentrated in the plant’s oils, coined CBD oil. This oil can have various concentrations of CBD and other cannabinoids that are simultaneously extracted including THC and the other hundreds of cannabinoids present in hemp. The oil extracted from hemp contains high concentrations of CBD, ranging anywhere from 40% to 99% purity depending on the process.

This distinction between hemp and marijuana is very important as we will discuss more in-depth in the “Is CBD Legal?” section below after we explore why anyone would want to use CBD containing products.

Products containing CBD oil can be found almost everywhere; grocery stores, chiropractors office, and pharmacies. Even local gas stations are getting in on the action. The CBD industry is projected to reach over 20 billion dollars within the next 5 years.

Over the counter CBD oil is being touted for a wide variety of health issues including acne, cancer, anxiety, sleeplessness, and inflammation. A major concern to think about is that most of these claims are unsubstantiated by scientific research. Well-controlled human clinical studies are needed to confirm or disprove specific claims and test their safety and efficacy.

Here are some potential health benefits of CBD and the science that backs them up.

Currently, the only Food and Drug Administration (FDA) approved the use of CBD is for the treatment of two rare forms of childhood epilepsy, Dravet syndrome and Lennox-Gastaut syndrome, which do not respond well to antiseizure medications. The approved drug is sold under the brand name Epidiolex and is manufactured by the British-based company GW Pharmaceuticals to a purity of 98% CBD. Use of Epidiolex is by prescription only. 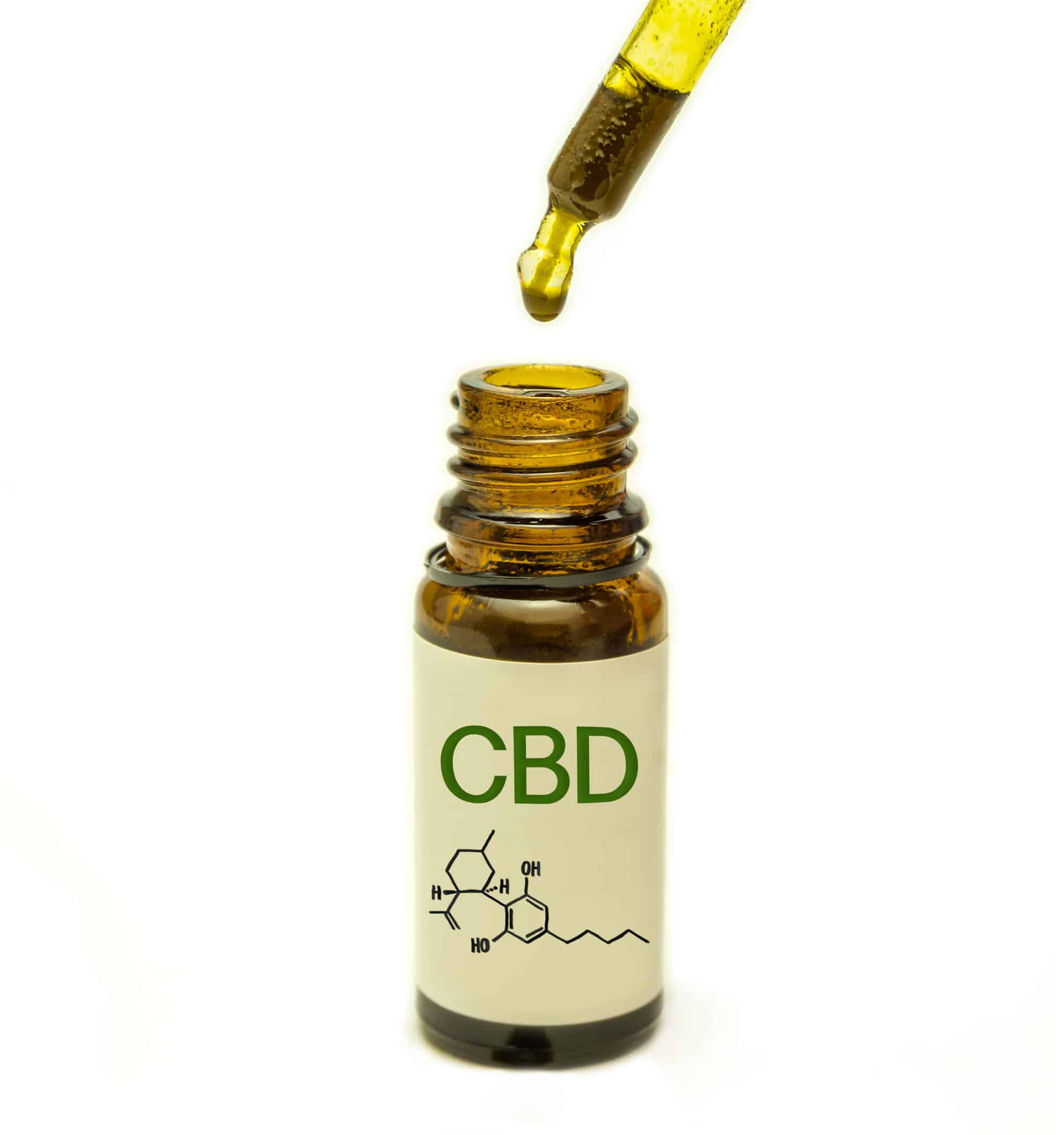 There are some indications that taking oral CBD improves anxiety and sleep in clinical populations. In a study published in 2019, Shannon’s team evaluated a retrospective case series of clinically diagnosed patients; there was no control population for comparison and these patients received other psychiatric medications as per routine patient care. The patients took a capsule containing the appropriate dose of CBD every day. Anxiety scores decreased during the first month and remained lowered; sleep scores showed mild improvement. A few patients reported side effects, but overall the CBD was well tolerated. It is noteworthy that the authors acknowledge caution in interpreting these results, noting that further well-controlled studies are required to make conclusive statements.

In an earlier study, CBD was shown to reduce generalized social anxiety (SAD). In the double-blind randomized study published in Neuropsychopharmacology, 12 patients with SAD were given 600 mg of CBD and compared to 12 control SAD patients. The researchers found that “Pretreatment with CBD significantly reduce anxiety, cognitive impairment and discomfort in their speech performance, and significantly decreased alert in their anticipatory speech.”

These results indicate the potential of CBD to reduce anxiety and sleep disorders. However, high-quality clinical trials in humans are lacking to test the effectiveness of CBD as a sleep aid, antipsychotic, or antidepressant to expand on these studies and those conducted in cell cultures and animals.

CBD might be useful for treating some types of chronic pain, although this remains to be proven in humans. Studies in rats indicate that CBD applied topically can lower pain and inflammation caused by arthritis. Likewise, other rodent studies suggest CBD inhibits inflammatory pain and neuropathic pain. Human clinical studies are needed to confirm these findings.

There is clinical evidence that a combination of THC and CBD is effective at treating neuropathic-related pain associated with multiple sclerosis (MS) and severe neuropathic pain in cancer. A product that is showing promise is sold in an oral spray as the prescription drug Sativex in several countries outside the United States.

Side Effects of CBD

All these benefits of CBD are not without risks. The most common side effects of CBD in the Epidiolex study were “sleepiness, sedation, and lethargy; elevated liver enzymes; decreased appetite; diarrhea; rash; fatigue; malaise and weakness; insomnia; sleep disorder and poor quality sleep; and infections.”

It was noted in the Epidiolex epilepsy studies that about 10% of people taking CBD had increased liver enzymes, indicating possible liver damage. A few individual’s liver enzymes were so high they had to discontinue the study. Also of concern were increases in some anti-epileptic drugs in the blood in the CBD treatment group, indicating the potential of CBD to interact with other medications.

How Does CBD Work?

CBD acts on many different molecular pathways and this is likely the reason such a wide variety of health claims are attributed to this potent compound. Our understanding of CBD is expanding at a record pace, including the elucidation of the mechanisms by which CBD functions.

The mechanism of action is complicated in that CBD affects multiple systems, including a cannabinoid pathway that occurs naturally in our body. The body actually produces endocannabinoids and has a specialized endocannabinoid system (ECS). Endocannabinoids are an integral part of a healthy system that help regulate a wide variety of functions including appetite, sleep, pain, and the immune system.

Here is a condensed version of the some of the molecular pathways influenced by CBD. 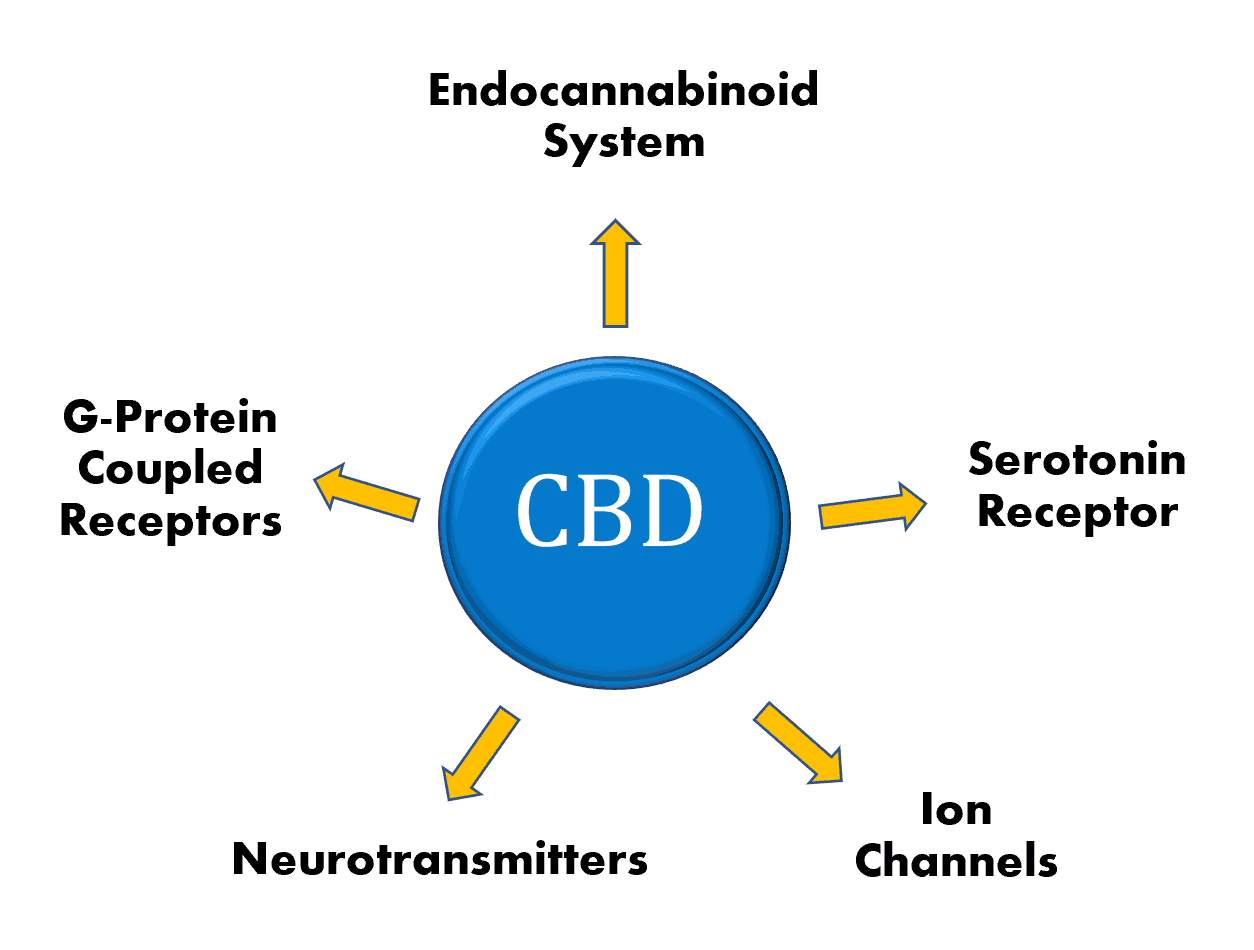 This might explain why CBD can have such a broad affect. For example, CBD can directly activate a serotonin receptor, which is implicated in a wide range of neurological and biological processes that regulate mood and social behavior including anxiety, addiction, pain perception, and sleep.

This recent scientific review published in Surgical Neurology International entitled “Review of the neurological benefits of phytocannabinoids” provides an in-depth look at the mechanism by which CBD acts as in the neurological system. Most of the studies in the review are carried out in cell and animal models that are used to decipher molecular mechanisms of action.

The FDA is also warning consumers purchasing and using products that claim to contain CBD because many of the products the FDA tested do not have the CBD levels the company claims.

Be warned, there is a good chance that the product does not actually contain the amount of CBD promised. In 2017, 55% of the CBD oil products tested did not contain the concentration of CBD listed on the label. Too little CBD was detected in 25% of the CBD oils tested, while about 30% had higher levels than advertised. Differences were also detected in Tincture and vaporized liquids.

Read product labels carefully and buy high quality products. FDA is concerned with the potential for high concentrations of THC in CBD oil extractions. “A quick calculation for illustrative purposes shows that when hemp containing 0.3% THC and 5.0% CBD is subject to extraction the final product will contain THC as about 6% of the CBD, since the THC and CBD are removed in an essentially similar manner

It’s complicated and can vary from state to state!

CBD can be legally sold in cosmetics, such as lotions and creams; Cosmetics are given more latitude than drugs in their regulation by the FDA; therefore, CBD can legally be added to cosmetics as long as labeling and marketing claims comply with FDA regulations. Products in the form of lotions, salves, and ointments are considered cosmetics.

CBD in a food or dietary supplement is considered a drug by the FDA and is regulated as such. Thus, the use of CBD in products taken orally is much more complicated and laws vary state-by-state based on whether the state allows the use of medical marijuana and if that law included allowances for use of CBD oil from hemp. Likewise, some states have passed the legalization of recreational marijuana and CBD from hemp may or may not fall in that jurisdiction. Make sure and check with your state’s laws before selling or consuming CBD foods or supplements.

Federally, it is illegal to sell CBD in food or dietary supplements across state lines without going through the same process of safety and efficacy evaluation as every other drug on the market. To date, only GW Pharmaceuticals is approved for a drug containing CBD (Epidiolex) in the United States.

Surprisingly, the 2018 Farm Bill is the reason hemp, and by extension CBD, can be grown and marketed—with restrictions—in the United States. For decades, hemp was grouped with other cannabis plants which effectively made hemp illegal based on the 1970 Controlled Substance Act.

When the 2018 Farm Bill was signed into law, it exempted hemp from the control substances act (CSA). Up until then the only portion that was exempt was the hemp seed. Hemp growers lobbied congress to allow the growing of the hemp plant resulting in the initial changes to the 2014 Farm Bill. The 2018 Farm Bill fully expanded the use of hemp to the current level.

The FDA clarifies some of this information in its Q&A page:

FDA Regulation of Cannabis and Cannabis-Derived Products: Questions and Answers